Next up on my fall running adventure schedule was the Dumbo Double Dare - two days of running totaling 19.3 miles at the Disneyland resort in California. I had been looking forward to this for a long time because the Dumbo medal is super cute AND it would give me a chance to see my Disney running friends. I have been very lucky to have made such a great group of friends over my years of running. It started out with my local running group and has gradually expanded to include runners from around the country. For all the stories in the news about the dangers of social media and how it's cutting people off from "real life" interaction, for me personally the opposite has been true. I've made at least a dozen great friends via the Internet who I have been lucky enough to run with from Coast to Coast.

The first race on the weekend schedule was the villain themed 10K. My running group had custom running shirts made this past summer that were black with red and yellow flames and a flaming Mickey Mouse skull. This is NOT my typical look but it seemed to go well with the race theme. I decided to throw it together with my ruffled Vixen skirt from Skirt Sports. We looked pretty awesome, I have to say, and got a ton of compliments from the other runners on the shirts. 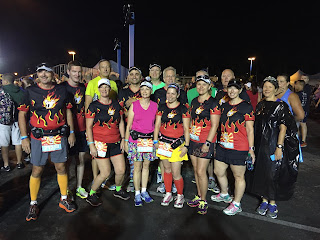 I was a tiny bit worried about this run because I hadn't run at all since the marathon-to-nowhere and despite having run 100s of miles at Disney races by now I'm still never sure how my legs will feel after two days of being a tourist in a theme park. My other minor worry was running at a 2:1 interval instead of my normal :60/:30 since I hadn't done that in awhile. Luckily, the legs and the interval felt great and I had an awesome time with my friend Julie posing for photos all over the parks. 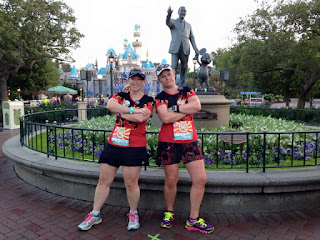 Posing near the tiny castle 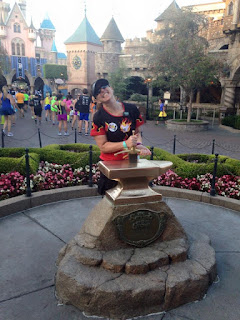 Trying to become the new ruler of England: 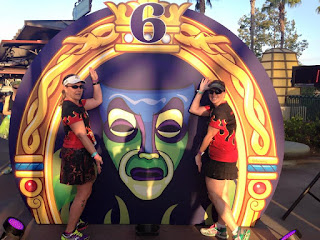 After the run, in true Disney fashion, I spent the day running all over Disneyland and California Adventure going on rides, eating snacks and having celebratory drinks. (Exactly what one should NOT do when having to get up at 3:30 AM to run a half-marathon!)

Sunday dawned bright and early and I picked up some more friends to run with in the parks and on the streets of Anaheim. I can not express enough how much fun it is to go on a run with a bunch of people when your only goal is to see the sights, enjoy the course, and get to the finish line. 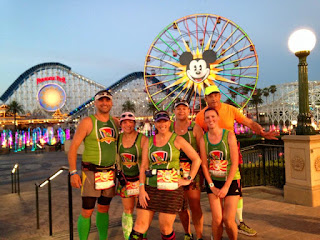 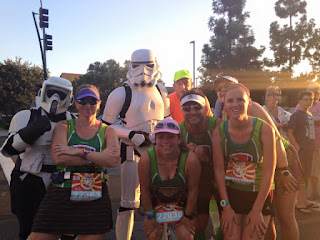 Eventually, close to the end of the run, I saw a pile of discarded costume parts and when I realized the pile contained a bedazzled hat with attached Dumbo ears and I just could not resist the impulse to trash-pick the abandoned item to wear across the finish line. We laughed our heads off in the last half mile about the ears and the reaction of my germophobic friend to the whole transaction. They do not call this the Dumbo Double Dare for nothing! 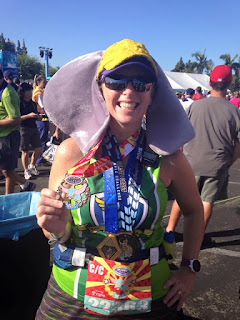 One of my team's favorite things to do at Walt Disney World marathon weekend is to ride the Expedition Everest roller coaster in the middle of the marathon. There's no chance to do a similar thing out in California so we decided that the next best thing would be to go directly to California Adventure and ride the Grizzly Rapids ride while wearing our race outfits and medals. OMG. There should be a flume ride included after EVERY summer run. It was so incredibly fun. I tried to take video during the ride with my cellphone inside a baggie and it looks like some kind of Blair Witch Project type movie. So funny and such a great memory. 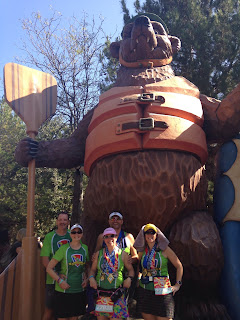 I was in California for just over 4 days and I picked up four new shiny medals and tons of memories on the trip. It was worth all the time stuck in an airplane, for sure. 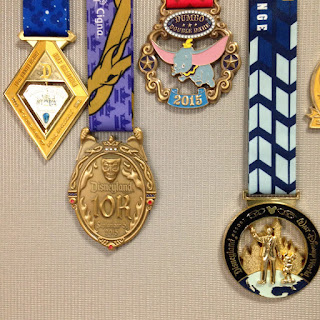 Next up: Bird In Hand race weekend in Lancaster, PA. This is a 5K/Half-Marathon combo and will feature hot air balloons and an entirely different cast of running sidekicks!

Helen
I started walking in 2002 and did my first marathon in as a walker. Since then I've turned into a runner (slow but still running) and I've finished 28 marathons. I've also done more than 50 half-marathons but sometimes I lose count of those. I've done a 50 miles during a 24 hour race. Now I'm considering where I want my running to take me. In the meantime I'm reading a lot and thinking about getting my bike out and doing some cycling... 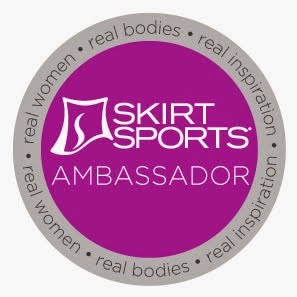